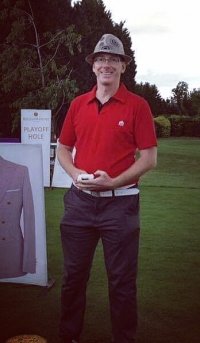 Throughout the year we like to hear from our members and visitor golfers, its a great way to hear about different stories, success and share more around our common interest.

First up,  we hear from our Member Mark Stokes.

How long have you been playing golf, and what inspired you?

I’ve been playing for 28 years (where has the time gone?!!?), although I only played a couple of times a year between 2003 and when I joined Gaudet in 2016. My first game was at the pitch and putt course at my local park, with a mate from school who was notoriously bad at sport. Having played before, he gave me a good thrashing – so I decided to learn how to play in order to beat him and regain my pride. But golf turned out to be very addictive…..

What’s time, day or season do you most prefer to play golf and why?

May is my favourite golfing month – the course finally looks like a proper golf course again after the winter, and early season enthusiasm has not yet been totally crushed by a series of nett 79s…… The conditions generally suit my game – it’s usually still quite soft. I don’t enjoy very hot weather, especially when courses are baked hard as they were last summer – yuck!

What’s your favourite hole on the Gaudet Course, and why?

Hmmm…. I’m not sure that I have a “favourite” as such. I have a soft spot for 13 as I usually play it well and am very fond of how the sun highlights the mounds and undulations around the green when you play in the evening. 11 and 12 are a pair of holes that would not look out of place on any course – but they’ve ruined too many of my scorecards to count as favourites!! Let’s say I can appreciate them….

When I started out it was Nick Faldo. These days I admire Ian Poulter. He’s the same age as me, and is still competing at the top level. He doesn’t claim to have the natural talent of other top players, but has worked hard and battled to get where he is. And I don’t think I need to explain about his contributions to the Ryder Cup team!!

What do you feel is the main benefit of becoming a member at the golf club?

I’ve been a member of several clubs over the years, and this one has been by far the friendliest and most welcoming. I’ve had some difficult personal issues recently, and Gaudet has been like a little oasis where the outside world can be put to one side for a while. It’s great to be surrounded by people who share your passion for the game.

If someone was unsure about joining a golf club, what advice would you give them?

Give it a go. Put yourself forward for things, talk to people. Enter the competitions and put your name down for the club teams. There’s so much going on here – but members do need to be proactive to get the most out of it. Don’t be negative. It’s all there for you, organised by fellow golfers who give up their spare time for no financial reward.

What do you think your biggest achievement or success has been since playing golf?

I was delighted beyond measure to be named Member of the Year in 2017, after only having joined the club the year before. In terms of playing, I finally got to a single figure handicap last year. It took a lot of hard work on the practice area as I’m not a naturally gifted player – but it was a goal I set myself when I joined the club. I think going from 17 to 6 in under two years was pretty good!

Whether you’re a long-term golfer or just starting out, we would LOVE to hear from you… why not share your story.
Email marketing@gaudet-luce.co.uk